In defense of right to keep, bear arms

The Ash Wednesday massacre at Marjory Stoneman Douglas High School in Parkland, Florida, seems to have broken more hearts than similar tragedies before it. It was no more senseless than other American school shootings, but there is something about the innocence, bravery and eloquence of youthful survivors that has touched the souls of Americans deeply.

After burying their dead, the survivors mobilized into a mighty political force that loosely seeks more laws to regulate the right to keep and bear arms. The young people, traumatized and terrified with memories of unspeakable horror that will not fade, somehow think a person bent on murder will obey gun laws.

Every time I watch these beautiful young people, I wince, because in their understandable sadness is the potential for madness — “madness” being defined as the passionate and stubborn refusal to accept reason. This often happens after tragedy. After watching the government railroad Abraham Lincoln’s killer’s conspirators — and even some folks who had nothing to do with the assassination — the poet Herman Melville wrote: “Beware the People weeping. When they bare the iron hand.”

It is nearly impossible to argue rationally with tears and pain, which is why we all need to take a step back from this tragedy before legally addressing its causes.

Thomas Jefferson, who claimed to be neither theist nor atheist, wrote in the Declaration of Independence that all men are created equal and are “endowed by their Creator with certain unalienable Rights.” Such rights cannot be separated from us, as they are integral to our humanity. Foremost among our unalienable rights is the right to life — the right to be and to remain alive.

The reason for all this is natural. It is natural to defend yourself — your life — and your children. The Framers recognized this right when they ratified the Second Amendment. They wrote it to ensure that all governments would respect the right to keep and bear arms as a natural extension of the right to self-defense.

In its two most recent interpretations of the right to self-defense, the Supreme Court characterized that right as “pre-political.” That means the right pre-existed the government. If it pre-existed the government, it must come from our human nature. I once asked Justice Antonin Scalia, the author of the majority’s opinion in the first of those cases, called the District of Columbia v. Heller, why he used the term “pre-political” instead of “natural.” He replied, “You and I know they mean the same thing, but ‘natural’ sounds too Catholic, and I am interpreting the Constitution, not Aquinas.”

With the Heller case, the court went on to characterize this pre-political right as an individual and personal one. It recognized that the people who wrote the Second Amendment had just fought a war against a king and his army — a war that they surely would have lost had they not kept and carried arms that were equal to or better than what the British army had.

But even after Heller, governments have found ways to infringe on the right to self-defense. Government does not like competition. Essentially, government is the entity among us that monopolizes force. The more force it monopolizes the more power it has. So it has enacted, in the name of safety, the least safe places on earth — gun-free zones. The nightclub in Orlando, the government offices in San Bernardino, the schools in Columbine, Newtown and Parkland were all killing zones because government prohibited guns there and killers knew this.

We need to face a painful fact of life: The police make mistakes like the rest of us and simply cannot be everywhere when we need them. When government fails to recognize this and it disarms us in selected zones, we become helpless before our enemies.

But it could be worse. One of my Fox News colleagues asked me on-air the other day: Suppose we confiscated all guns; wouldn’t that keep us safe? I replied that we’d need to start with the government’s guns.

When they first started talking about raising the age limit to 21, I thought "Maybe, lets see where they want to go with this". But then I said "No! If someone is Hell bent on hurting others, they'll find a way no matter what age they are". If they can't get a gun legally then they'll get one illegally. Besides, most of these mass shooters are older than that anyhow. Wanting to make new laws is just a knee jerk reaction to a tragedy. And new laws will only affect the law abiding. It never affects criminals. 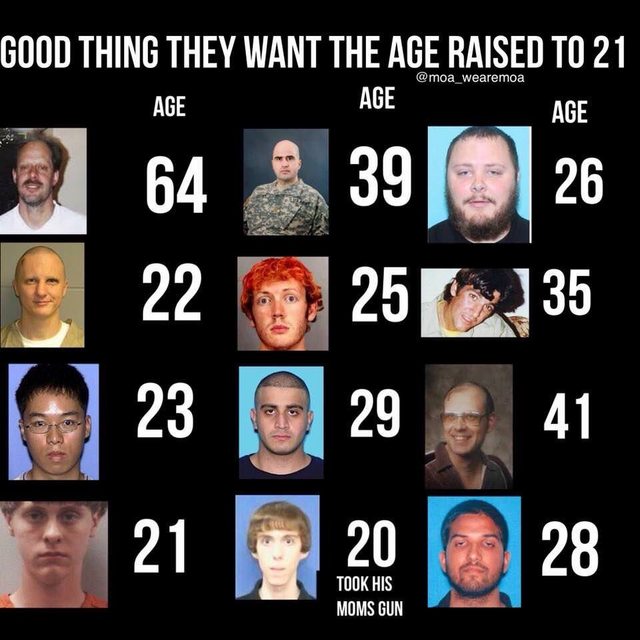 You must log in or register to reply here.

Repeal ALL 'Gun Control', Including Licensing of CCW