The winner was the military complex. We lost a lot of young men, fighting communism just to have a commie potus. What did we win?

I'm expecting great things out of his administration. I hope he shows real signs of getting the US back on track during his first term. I'm hoping that he brings manufacturing back and in doing so puts people back to work. I'd like to see the unemployment rate at an all time low. Maybe then, these liberals will see that putting a businessman at the lead was a good thing to do and want him for a second term.

I'd also like to see liberalism taken out of our schools. But I'm not holding my breath on that one. Teach the students that you can't win or get a participation trophy every time. That's not how life works. Be prepared for disappointment and how to handle it. Throwing tantrums and defacing property or burning flags isn't tolerated when things don't go your way.

It's also refreshing to see and here thanks being given to God during his and Pence's speeches. Perhaps they can bring God back into places he's been removed from again. At least teach morals and the difference between right and wrong. So many of todays youths don't have that.

I really hope that he's a very successful president and with that every one of us (liberal or conservative) sees some success too.

A few thoughts from Micheal Bane.

USA – -(Ammoland.com)- Both Democrats (predictably), the Republican establishment (also predictably) and the discredited MSM (because they don’t have a clue) are giving their “mend a divided nation,” peace love and flowers speech.

Before we all sit down at the same drum circle, I’d like to clarify a few points:

1) We didn’t elect Trump to “end the gridlock in Washington.”

2) We didn’t elect Trump to “reach across the aisle to get things done.”

3) We didn’t elect Trump to cozy up to the Democrats and see if they can find a “compromise” way to chip away at our rights.

We elected Trump — and I have been all-in for a long time — to END the “fundamental change” of America, to drag the “Obama legacy” into the sunlight, tie it to a post, execute it, then bury it in unhallowed ground.

Only then can America move ahead.

A couple of more points of clarification, at least from my point of view (which is, parenthetically, the only one I am qualified to give):

2) After the progressive far-left takeover of the Democrat party, those Democrat plotted — gleefully — how they were going to strip me of my rights as soon as they were in office. They made it a talking point. They did not give a damn that the vast majority of Americans were against them; rather, they operated on Barack Obama’s coda of, “Elections have consequences.”

3) Socialism, even in it’s Democratic Party guise of “progressivism,” is evil, a boot on the face forever, to paraphrase Orwell. Socialism is the handmaiden to totalitarianism. It has never worked; it will never work. If you as an individual would like to participate in a socialist experiment, move to Venezuela or any number of African pest-holes. They would be happy to have you, and the money in your wallet. Bring your own food. I unconditionally oppose any compromise on moving America in that direction. I opposed it on Monday; I opposed it on Wednesday.

4) I see no difference between “progressives” and, say, violent anti-Semites or America Nazis — they hold opinions which I do not and can not countenance. Moreover, progressives, as are their analog anti-Semites and virulent racists, are evangelical in their zeal to spread their vile teachings. Compromise? What compromise is there with evil?

5) If you are a liberal, that is, you come with a different world view than mine, fine, we can talk, argue, maybe find some common ground. If, however, your liberalism extends to limiting my rights or exercising power over my life, there is no common ground to be found.

6) On Monday, I was a small “l” libertarian and a single-issue voter. Nothing changed on Wednesday morning.

progressives as far as I am concerned are communist , and need to be put down. Hand up not out.

People with Trump Acceptance Resistance Disorder are characterized by a persistent unwillingness to accept that Donald Trump is going to Make America Great Again. Individual sufferers often display signs of paranoia and delusion; in acute cases psychotic episodes have been observed. Trump Acceptance Resistance Disorder is different from being upset about the results of the 2016 presidential election; People with TARD are unwilling or unable to accept reality, despite irrefutable evidence.
According to the DSM-V, individuals with TARD exhibit most or all of the following symptoms:

Telling others they are moving to Canada
Fixated on fantasies about the Electoral College
Protesting an election no credible source contests the outcome of
Exclamations that “Someone” should do “Something”
Sudden weight gain
Acute change in demeanor from pompous and arrogant to fearful and combative
Claim that anyone who disagrees with them is some combination of Racist, Sexist, Bigoted, Homophobic, and Actually Hitler

Trump Acceptance Resistance Disorder was directly caused by the election of Donald Trump as President of the United States of America. For many, both in America and worldwide, this was a shocking and unexpected outcome; their preferred news sources having failed to inform them that the alternative candidate was a criminal parasite in such ill health she got chucked into the back of a van like a kidnap victim.
Research is ongoing, but TARD appears to correlate closely with the following environmental and behavioral factors:

Diagnosis of Trump Acceptance Resistance Disorder is straightforward. Ask the patient if Donald Trump is going to be the Next President of the United States of America. Some patients will become agitated, and may attempt to deflect. It’s critical you press them on the issue, even if they start babbling about ‘muh triggers’. A sufferer of TARD will begin to ramble incoherently, often displaying three or more of the symptoms within a short period of time.

The only known effective treatment is exposure therapy. The patient must be repeatedly exposed to reality, and should wear a Make America Great Again hat as long as they are able to tolerate it. Each exposure should increase in length, after a week the patient should be encouraged to be seen in public wearing the MAGA hat. Coach the patient to refer to Donald Trump as President-Elect Trump.

Patients with TARD are very resistant to treatment, and dangerous in large groups. Any possibility of treatment requires that they be separated from their hive-mind support apparatus; they cannot begin the process of accepting reality in the presence of encouragement towards delusion and irrationality. Separation may require the assistance of law enforcement.

If you have a friend or loved one suffering from TARD, urge them to seek treatment. Together we can beat this scourge, and Make America Great Again!
Click to expand...

And get your watermelon out of the rose garden.

A message to the protestors.....

The feeling you are currently feeling is called losing. It is something you are supposed to experience throughout your entire lives, however, your helicopter parents and all the liberal whiney fucks just like you decided that you all deserved trophies and ribbons despite the fact that you suck at life.

This was done to make sure that your precious little feelings were never hurt, and that you felt special just like all the other little snowflakes out there. Unfortunately all they have done is create a generation of weak, whiney, little babies.

So please put down the Play-Doh, set aside the coloring books, and understand that the only thing in life that you are actually entitled to is death. 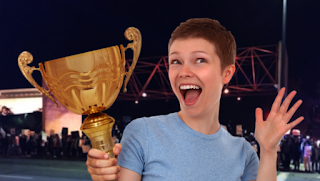 U.S.—As anti-Trump rallies nationwide turned hostile overnight with widespread reports of violence, looting, vandalism, and death threats against the president-elect and his supporters, police in numerous major cities were able to instill calm and regain control by handing out participation trophies to all millennial protesters who were enraged about losing the election, sources confirmed.

The shrewd tactic was the idea New York Police Officer Joe Butler, who has three twentysomething children himself, and noted to reporters Thursday that he remembered how his children “never had to deal with losing as they were growing up.”

“It’s a foreign notion to them. Even in sports—win or lose, everyone won, and everyone got a trophy no matter what. This is the millennial way,” he said. “So I had the idea—hey, why not start handing out participation trophies to the protesters, and telling them ‘Hey, you know what? You may have lost the election, but look—everyone gets a trophy. Everyone’s a winner.'”

Seeing how the trophies had an instantaneous calming effect on the millennials and filled them with a sense of fulfillment and achievement, word spread quickly among police departments nationwide, and emergency trophies were procured by the thousands for use at the rallies.

At publishing time, police had regained control in cities across the country, and the crowds of now-content protesters were heading home with their trophies, according to sources.

Posted November 10, 2016 at the The Babylon Bee, Your Trusted Source For Christian News Satire.
Click to expand...

kwo51 said:
I think they should give them a bat with a fire hose , and a job at Mackie's Dees.
Click to expand...

Most of them couldn't handle the pressure of a job at McD's. During the lunch hour they are required to actually perform their job and get food across the counter at a rapid pace. They would assume the fetal position on the floor once the manager started raising his/her voice trying to get them to get the right burger on the right tray to the correct customer.
K